116 years from the birth of Arturo Gilardoni

Arturo Gilardoni was born on June 17, 1905. He was the founder of Gilardoni Raggi X, a Scientific Industry that for almost 75 years has always been in line with the times, with an eye to the future to anticipate the demands of society. We want to remember Arturo on the occasion for the 116th anniversary from his birth with this short article.

From an old testimony we know that our Arturo had a lean physique, a simple and essential style, dressed in white in summer and blue in winter, often wearing a blue tie with white polka dots; “he even designed his own clothes”. Others describe him as “a simple person, of a few words, he has always defined himself as an inventor”.

He was a man in love with nature, in fact he drew inspiration and vital energy from it. He wrote some sentences for a monography on the violin (X-ray inspected) with his expressive and meaningful thoughts on art and music. He loved the continuous dissemination of every intuition, observation and discovery which he published in conference proceedings, books or in the “NotaGil”, a company news report founded in 1962. He partecipated in many seminars around the world, also meeting eminent scientists such as Enrico Fermi and Albert Einstein. 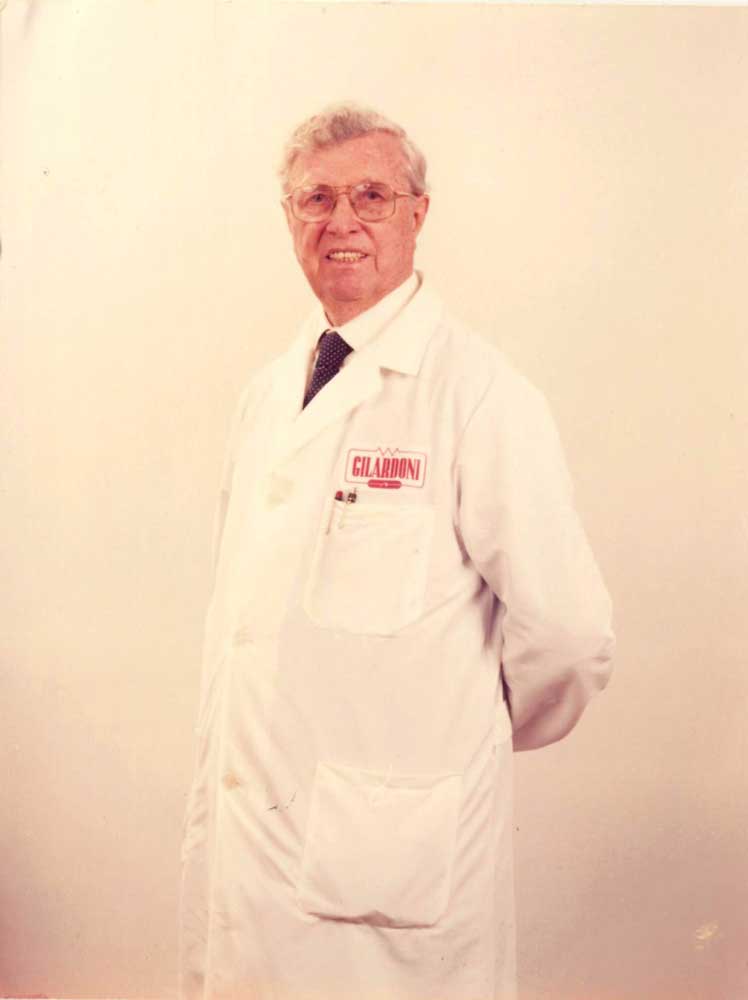 "he even designed his own clothes"

"a simple person, of a few words, he has always defined himself as an inventor"

Arturo devoted many hours to studying, turning his passion into scientific Research applied to Radiology. The transition from science to industry was also facilitated by his aptitude to the practical, constructive and formative teaching of young people. In fact, the training (especially for his collaborators) was the main goal of his scientific publications, courses and exercises. It’s also thanks to them if the company has grown more and more, making the passion for radiological research the story of a man of science and the story of a scientific industry.

The spark that triggered that desire to deepen radiology in Arturo Gilardoni’s mind was the visit to the exhibition for the centenary of Alessandro Volta; it was like an illumination that sealed his destiny. He then decided to devote himself to the study of physics and radiological electrical engineering, with that audacity, perserverance and spirit of sacrifice that were already part of his personality.

Engineer Arturo Gilardoni had started working as a volunteer at Siemens, in the high voltage sector. To go to Germany he borrowed money from his grandfather, director of the Valle Meria (Falck), a steel mill of that period. Grandfather said to him: «I lend this money to you and you’ll give me it back». At that time, to give the good example and the right education to young people, money was not given as a gift, it was lent and returned later (and so did Arturo, he returned the entire loan to his grandfather).

After the Second World War he was offered the management of the new Siemens in Milan which was to rise from the ruins, but Arturo Gilardoni preferred to be self-employed. He started with the production of a small monoblock which guaranteed him great success.

Arturo Gilardoni is remembered for the invention of MONOBLOCKS in Italy, in fact they were not known at that time. The radiological equipments were huge machines (coming from foreign markets), with big generators, difficult to transport and manage. With the invention of Monoblocks, the Engineer has been able to put all the power of a system that was initially fixed and not transportable into a casing weighing a few kg. In this way it was possible to transport the X-ray generators not only outside the factories, allowing for on-site controls, but it was also possible to make a portable medical device even at the patient’s home.

In the high voltage sector, with Pugno Vanoni, he designed a system of 800000Volt, an authentic European record of that time. He obtained many awards such as, for example, the Leonardo da Vinci prize  for a particular and very short pulse X-ray generator, as well as an honorary degree in Physics at the University of Ferrara in 1971.

He wrote four treatises during His life in Gilardoni, including one in 1973, 50 years after his imprinting with radiology. He felt the need to condense his anniversary into a book. He did not pretend to give absolute truths, also because as a researcher he knew well that the truth is always “after” the latest discovery. Arturo always repeated that the treatises are already born old, but they can serve as “photographs” of the past, to retrieve data and make them a springboard for new conquests.

That spark was for him a sure beacon that marked the path of his life and his work. And so, for Us, after more than seventy years, and now in the third generation, Arturo becomes our beacon. For us he remains an irreplaceable model as he has been able to transmit the fundamental values on which Gilardoni company is still based today. We would like to remember an advice that he often repeated to his boys, the concept of “simplicity”.

“Getting used to thinking and working with simplicity solves problem better and more easily, eliminating the superfluity of thought and action”

We sincerely thanks a man who was able to create and grow a company as if it was his family, passing on his teachings and advices  which always accompanied the various generations that has followed one another over time.